After the Kiwis had pretty much had things their own way so far this week, Olympic champion Giles Scott, from Britain, struck back on the breezier fourth day of the 50 Trofeo S.A.R Princesa Sofia IBEROSTAR in Palma, Mallorca with a 4, 2 to move up to second overall. Despite having his worst day so far, overall leader Andy Maloney, from New Zealand actually extended his lead to 11 points, while teammate Josh Junior drops one place to third, on equal points with Scott, with just two more races to sail before Saturday’s medal race.

It was a very different day on the water than the past three days with a stiff, and cold, 15-20 knot westerly in place. Coming off the western shore of the Bay of Palma it was full of shifts and brought a steep chop downwind to give the fleet a new set of conditions with which to contend. 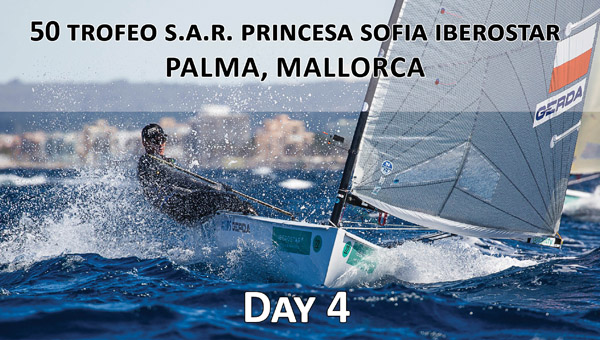 Highlights from Day 4 in Palma 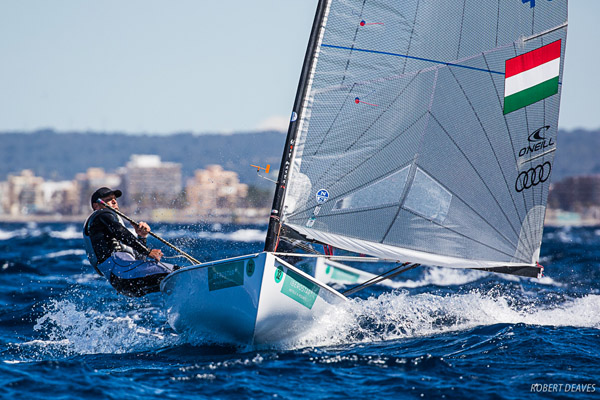 European Champion, Ed Wright, from Britain, took the win in Race 7, followed by a fifth in the next to move up to eighth overall, but still 30 points off the podium. Race 8 was dominated by the world champion, Zsombor Berecz, from Hungary, after picking the correct side of the course and leading the fleet throughout. Despite a 15th in the first race of the day, this moves him up to fifth overall and just 13 points off the podium.

In the silver fleet the first race went to Finn class rookie, Luwen Shen, from China, while the second went to Irish hopeful Oisin Mcclelland, clearly enjoying the bigger conditions with his best performance of the week.

Berecz said of his regatta, “So far it’s been a great week. It’s a good chance to check the training and how it is working out. I have managed to have a very consistent week. I think my worst race is 16th, so nothing special, but also today was the first day that I managed to hit the right side of the first upwind and I managed to win the race. So I am happy so far.”

On his progress towards Tokyo 2020, for which he has already qualified. “We have some time and chances now to test some new equipment. I am trying a HIT mast here for the first time and it’s proving good, so I am looking forward to test some more stuff, but definitely there are some gains to be made in some conditions.”

Commenting on the decision to drop the Finn from Paris 2024, he added, “The main goal for all of us is still the Olympics. As it looks like now, the Finn is out for Paris. I hope it is not going to happen. We do everything we can to keep the Finn in the Games and I hope it will stay.”

“It’s a shame that the young talents that we have in the fleet, and we have lot of them actually, just over 20 years old, and they are improving a lot year by year. If it stays like this it is a shame they will not have any chances to compete in the Games. So I hope it will not happen.” 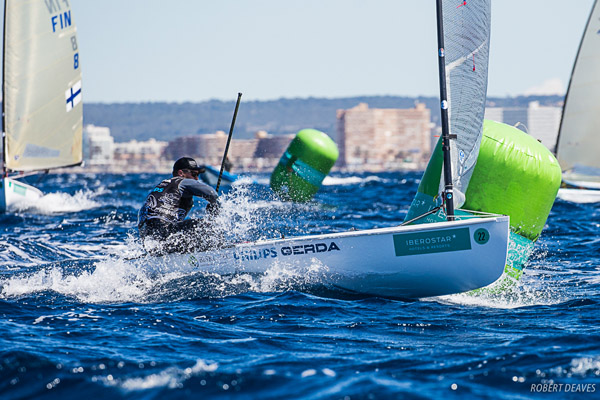 Wright has been chasing his Olympic dream for 14 years in the Finn and is arguably sailing as well as he has ever done.

He said of the day, “It was a bit of a different day today with more wind. Really great conditions, but a bit shifty, and quite hard to read. I got two good starts, tacked on the shifts and went fast. It was all right in the end with a first and a top five.”

Wright joined the throng lamenting the loss of the Finn on the Olympic programme. “On a sad note, the Finn has been dropped from the Olympics. We have had a very successful few cycles with the Finn, so a sad day for the Finn class and British sailing I think. It’s a very physical boat and it was absolutely wonderful sailing out there today.”

Wright posted 6 points to the scorecard today, the same as Scott and Piotr Kula from Poland.

Kula said, “My week so far was going quite well until yesterday. Yesterday I made some mistakes that pushed me down on the finish line, but still I was in front of the pack, and today I got two thirds, so I am very happy with that.”

On qualifying for Tokyo, “I am doing quite a nice programme now, slowly, slowly, I am putting things together quite nicely. It would be a big thing to qualify for a second Olympics, especially after the not so successful Rio campaign, so that’s the main focus right now.”

The next qualification event is the European Championship in Athens in May. “I like Athens. I have been there before. I think it s going to be really challenging, so the four best guys who qualify there are really going to have to be at the top of their game.”

On the dropping of the Finn, “It’s a horrible shame that the Finn has been dropped from the Olympic programme. I hope that it’s going to be back. It’s a shame because it means that all other guys our size are cut out completely. We have one junior from Poland, who told me that he went into the Finn from the Laser because he woke one morning saying he had had a dream that he was in the Finn at the Olympics, winning the last race and winning the Olympics.”

“A lot of young people dream about sailing the Finn in the Olympics and having a career in an Olympic Finn. It’s a real shame that we are not going to be part of the Olympic family anymore. I hope, I really hope, that it is going to be back because it is a decent boat. I spent my entire adult life in the Finn. I owe the Finn so much in my life that it’s beyond description, so it’s a shame and I really hope it’s going to be turned around.”

Racing in the opening series in Palma concludes on Friday with two more races scheduled to complete the ten race series ahead of medal race for the top 10 on Saturday. 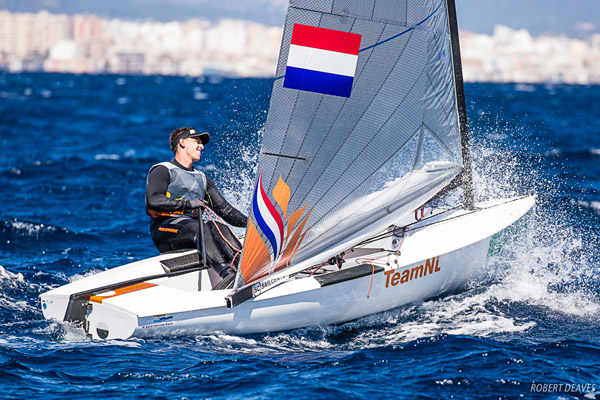