The November 2012 edition of FINNFARE has been published.

The November 2012 issue (No 142) of the International Finn Association's magazine FINNFARE has been published and includes extensive reports, photos and comment from the London 2012 Olympic Sailing Competition. It is available in print and online versions. 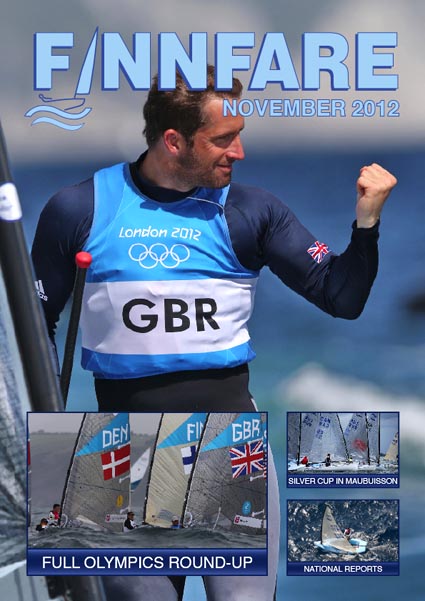 With more than 10 pages devoted to the Olympic Finn regatta, it contains the most extensive analysis of the Finn class published to date. We also speak to all three medalists, as they reflect post Games.

Some excerpts from the interviews:

Ainslie said, "The rest day probably saved me. It gave me a chance to consider what I was doing wrong."

On his back, "To be honest there were so many thing going wrong with my body that it was just one of many issues."

Hogh-Christensen said, "..silver was fantastic.. but.. .it will haunt me forever that I did not win."

"The reaction back home has been amazing. 1.2 million people watched the medal race in a 6 milion people nation."

Lobert said, "It is really nice to see the eyes of the kids when they see the medal."

"I try to put Olympic sailing under the lights and try and make people realise it is a great sport."

News - The latest Finn news from across the world

OFF - the ground breaking Old Finn Farts regatta in Toronto

This issue can be downloaded through the class website or viewed online here. Back issues are available through the Finnshop at www.finnclass.org/shop