A new Class Rule amendment regarding use of nationals flags on sails at selected regattas. 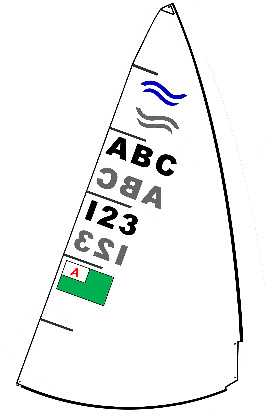 At the ISAF November 2012 Conference, Submission 086-12 was passed, requiring that  “At the ISAF Sailing World Championships, and at all ISAF Sailing World Cup regattas, all Olympic Class boats shall carry nation flags on their mainsails, in accordance with their Class Rules. If the Class Rules do not include a specification for carrying nation flags, they shall be carried in accordance with ISAF specifications.”

The Class worked with manufacturers, the 470 Class and ISAF to develop a new Class Rule to cover this requirement.

C.10.3 IDENTIFICATION
(a) The national letters and sail numbers shall comply with the RRS. See also G.1.4 (b).
(b) As an exception to G.1.4 (a), for winners of the Finn Gold Cup and for Olympic Gold Medallists in the Finn Class, the sail insignia waves may be coloured Gold.
(c) At the ISAF Sailing World Cup and the ISAF Sailing World Championship, or when required by the Notice of Race, a skipper national flag, nominal size 740 x 443 mm, shall be applied to each side of the sail, positioned such that the aft edge of each flag is between 50 and 100 mm of the leech and the upper edge between 50 and 100 mm below the second lower batten pocket. The flags shall be made by an ISAF approved manufacturer as listed at http://www.sailing.org/classesandequipment/FINN.php.

The following files may be useful:

A new Class Rule amemmendment regarding use of Nationals flags on sails at selected regattas.