Just in time for some holiday reading the December 2015 issue of FINNFARE is hitting doormats around the world. You can also read it online here. 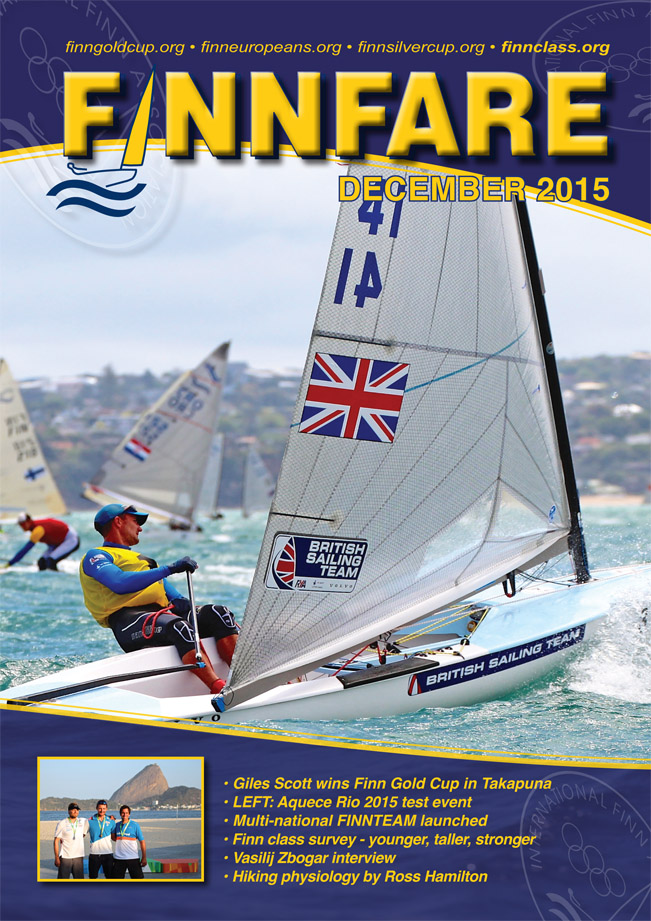 Just in time for some holiday reading the December 2015 issue of FINNFARE is hitting doormats around the world. You can also read it online here.

The exploits of Giles Scott features highly in the newly designed FINNFARE with extensive coverage of the 2015 Olympic Test Event in Rio and the Finn Gold Cup in Takapuna, New Zealand at the end of November. Scott's domination continues as the 2016 Olympic Games looms ever closer.

Five years ago the Finn class carried out an extensive survey of its top sailors to accumulate data regarding the weight, height and age of its sailors. A new survey published in October 2015 reveals that the trend is for younger, taller and stronger sailors than five years ago. The survey points out that this can be attributed to both the increasing average body size of the world's population but also highlights the increasingly athletic nature of internationally competitive Finn sailors.

Giles Scott's huge win in Takapuna was one of the biggest in the 60 year history of the Finn Gold Cup. There is in-depth coverage of his wins in Takapuna and the much closer win at the Rio test event. It is also worth looking at the top ten gear used in Takapuna with almost one choice for hulls and masts, but a much wider range of sails used.

With four Olympics behind him and two medals in the laser class, Vasilij Zbogar is heading into what he says is his last Olympics. Interviewed during the test event as was was recovering from a cycling accident, he reveals his preparation plans and how he has mounted one of the most successful commercial sponsorship programmes in Olympic sailing. Through all the years he has retained his love of sailing and the desire to continually improve. His bronze medal in Takapuna got him a interview on national TV in Slovenia – it is no idle boast that Zbogar is one of the most famous sportsmen in Slovenia. His advice to young sailors looking for suport: "You have to believe in yourself and believe in what you want to achieve and then make a nice story out of it. Make everything look very professional. I have had many doors closed and I didn’t get anything, but this is part of the experience. But then you refine your story and change it to find solutions and new ideas.”

Love it or hate it, hiking is an integral part of Finn sailing. In another fascinating look at the physiology of Finn sailing, former Finn sailor Ross Hamilton describes how the muscles are used and work while hiking hard and looks are aerobic training versus improving strength. He writes: "Hiking is a pretty complex process. The biggest mistake is to assume that it is purely a reflection of aerobic conditioning. While aerobic conditioning will help endurance, strength and experience also have an enormous influence. The stronger the knee extensors, the easier hiking becomes and the less reliant we are on conditioning. Do not neglect strength work and likewise do not neglect aerobic training. They are both essential to hiking endurance."

Also in the issue we round up the 'World Sailing' Sailing World Cup events in Qingdao and Abu Dhabi, have news of a Spanish oldie reunion, a Dutch initiative in Thailand to follow the King, opening of a new sports science laboratory at the University of Ghent names after Jacques Rogge, reports of the Euro Masters and the FINNTEAM initiative as well as regatta reports from France, Germany, Italy, Japan, Poland, Switzerland, Russia and Ukraine. Especially encouraging were the reports of a reborn, and very enthusiastic Finn fleet in Japan as they start to prepare for the 2020 Olympics, and also the first report in many years of the continuing activity in Ukraine which seems to have a very active fleet of new and old boats.

You can view the new edition below or here or download the PDF here (6mb).