A look at the Finn under the water

In a recent Finn sail development cycle, WB-Sails needed a 3D Finn model, with hull, cockpit, crew and all, to be able to simulate the sail performance more realistically. With the hull model there, they thought why not add a centreboard and a rudder and take a look under the water as well. 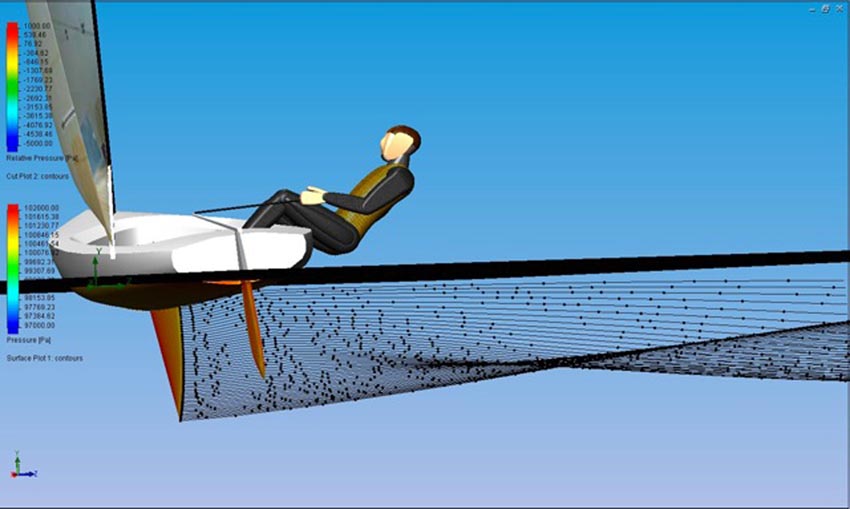 In a recent Finn sail development cycle, WB-Sails needed a 3D Finn model, with hull, cockpit, crew and all, to be able to simulate the sail performance more realistically. With the hull model there, they thought why not add a centreboard and a rudder and take a look under the water as well. Mikko Brummer from WB-Sails describes what they discovered.

The model was taken out of Gilbert Lamboley’s work on digitising the original Finn plans, “Body lines definition and control”, from 2003. We inserted a roughly shaped cockpit and centreboard case, with the centreboard exiting from the bottom. The underwater flow model was simplified so that wave-making was ignored, representing the sea as a flat surface, because our aero-code does not support free-surface modelling. Wave-making drag cannot be modelled, but otherwise the free surface is not believed to have a major effect on the flow pattern and pressures over the hull.

When sailing at steady speed, the underwater and above water forces and moments must be in balance. Care was taken that the simulated sail forces, drive and heel, and heeling moment match with the corresponding underwater forces, and the righting moment by the sailor hiking. The real righting moment is easy to estimate from sailing photos, considering that from trapezing dinghies we know that the centre of gravity of a human being lies more or less at the height of his navel. The simulation was run for medium-heavy conditions of 18 knot true wind. With the sail forces solved, the attitude of the underwater hull was adjusted (leeway and rudder angle at the given boatspeed of 4.9 knots) until the underwater forces matched the sail forces. The sail shape was recorded with a masthead video on Lake Garda, in a steady sea breeze of 18 knots but with rather a nasty chop, hence the GPS recorded boatspeed less than 5 knots – on flat water the Finn can easily exceed 5 knots of speed.

A comparison was also made to a Finn VPP (velocity prediction programme) run: All three simulations, aerodynamic above water, hydrodynamic under water and the velocity prediction programme forces agreed surprisingly well. The total drive (equal to the total underwater drag) of the Finn in 18 knots of wind is 20.5 kg force, or roughly 45 pounds – it’s not much, a weight that you easily lift with one hand.

A look at the results

The results of the analysis is best showcased by the accompanying computer screen dumps. The “Finn drag balance” pie-chart contains most of the information. “Drag” is here understood as a force in the direction opposing the motion of the boat. The largest portion of drag comes from the hull wave-making, predicted here by the VPP since it was not considered in the underwater CFD simulation. Nearly as big is the hull viscous drag, meaning the skin friction caused by water flowing along the hull surface. This includes also the pressure drag by the pressures varying from bow to stern, and also a bit of transom drag - the transom was modelled to lie a few centimetres under the sea surface, dragging some water along. The viscous drag was predicted to be exactly similar in the VPP and the underwater flow simulation.

The centreboard proved to be more efficient than expected – the thin, triangular plate-like board is not what you would call a modern appendage, but it does its job quite well. The rudder, so refined on the real Finn, was not modelled very carefully but rather the profile was just drawn freehand. So maybe its drag component could be slightly less than in the simulation. The rudder angle was varied until the boat was longitudinally in balance with the sail yaw moment. The yaw moment wants to turn the boat into the wind or away from it, and it has to be balanced by the rudder so the boat moves in a straight line. This resulted in a positive rudder angle of 1.5 degrees which is not too unrealistic. The simulation shows, too, how sensitive yaw balance is to the traveller position (sheeting angle). The underwater hull also contributes to the side force, to resist leeway – nearly 10% of the total side force is from the hull.


The drag due to seaway comes from the VPP. It means the additional drag caused by the (wind generated) waves. Finally, the smallest drag component, hull + crew air drag represents the aerodynamic drag of above water boat hull and the crew hiking, in the direction opposing the motion of the boat. At approximately 0.5 kg force the drag of sailor is twice as big as the drag of the Finn hull itself – Rickard Sarby designed the Finn also very aerodynamic. If you compare the hull air drag of about 250 grams to the total drag of 20,500 grams (20.5 kg), it is nil. Part of the reason for this is that close to the water surface the wind speed is much less, less than 10 knots, and this was allowed for in the aerodynamic simulation. So there is no reason for the sailor to dress in a downhill skier’s skin-tight suit, either.

The mast: to twist or not?

Not too much can be revealed of the aerodynamic sail simulation here, but there is one interesting notion we want to share. It has been general thinking that mast twist is desirable: You would want the mast top to twist in the same direction as the sail, to better align the top part wing profile with the luff of the sail. This simulation contradicts that belief. In heavy winds, the upper part of the sail is more or less ‘feathered’, or twisted away, and does not carry much load. The wind hits the mast on its leeward side and the topmast is effectively drag. Now, the more you twist the wing-shaped mast top, the more it presents itself sideways to the local airflow and the more drag there is. Negative twist, if achievable, might actually be better. The Finn differs from regular, sloop rigged boats with its rotating mast – the mast is actually already ‘twisted’ about 12 degrees when you sheet the boom down to the gunwhale. It must be added that we have little knowledge about how much and in which way the mast top twists in reality – it’s difficult to measure and hard to judge even from masthead video.

Text and pictures by Mikko Brummer/WB-Sails. For more pictures and flow animations, go to the Finn page at www.wb-sails.fi.