Bryan Boyd of Annapolis recently announced a full time Finn campaign for London 2012. In doing so he is going head to head against the 2008 Olympic Silver medalist Zach Railey of Clearwater, Florida. Both are currently competing in the fourth leg of the 2010 ISAF Sailing World Cup in Hyeres, France. 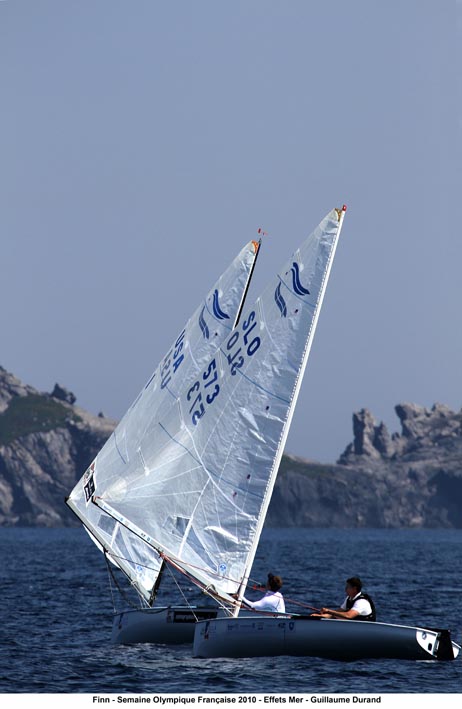 Bryan Boyd interview Bryan Boyd of Annapolis recently announced a full time Finn campaign for London 2012. In doing so he is going head to head against the 2008 Olympic Silver medalist Zach Railey of Clearwater, Florida.

Both are currently competing in the fourth leg of the 2010 ISAF Sailing World Cup in Hyeres, France. Boyd treated 2009 as a 'test year' before deciding to commit to a further two or three years hard graft in the Finn.

“This has been building up in me for years. In 2004, I got a good first hand look at what it takes on and off the water to succeed. Kevin Hall basically made mincemeat of the rest of the US sailors with a talented, funded, and professional program. I knew then that it would be difficult to move forward without all three of those components, and I only had talent going for me at the time. For the 2008 quad I was a glorified weekend warrior.”

“I was working hard to grow my construction business at home, and Finn sailing was just for fun. Enter the 2012 quad, and suddenly the US Sailing Team Alphagraphics has built a program to provide the funding and the professionalism. I think knowing and believing that the USSTAG would support me in bringing my absolute best effort to the game was the key component that lured me back into Olympic Finn sailing.”

Is Boyd distracted by going up against a national hero?

“Zach and I have an excellent training relationship. Part of that comes from the coaches coming to all of the sailors early in the quad and selling the benefits of the team culture. Another part is a byproduct of our shared pragmatism about the whole thing. I firmly believe that the best way to prepare for our Trials selection is to prepare myself for winning a medal against the best sailors in the world, not to focus on how I can beat Zach in a regatta. 2008 was 2008. There is no other class that pushes forward as hard as the Finn in raising the game.”

Clearly the change in focus for the US Sailing Team has been instrumental in enabling Boyd – and many others – to take on the challenge of an Olympic campaign, as well as the added benefit of corporate sponsorship. “The US Sailing Team Alphagraphics is my primary sponsor. They've developed great sponsor relationships with a number of great companies who believe in the direction the team is headed and have put their money where it counts. The whole team of athletes works together now, and you can feel it palpably when you get close to the team. I think our sponsors are excited to be a part of the team, and they can quite rightly feel a part of the medals we are going to win in 2012.”

Boyd has just embarked on a 10 week trip to Europe. After training in Valencia with the likes of 2004 Olympic silver medalist Rafa Trujillo, he takes in three World Cup events and the European Championship in Croatia as well as training at the 2012 Olympic venue in Weymouth, before heading back to the States for the Finn Gold Cup (World Championship) in San Francisco in August.

With Boyd back in the race, the USA is currently in the fortunate position of having two top Finn sailors capable of winning races - and maybe regattas - a state of affairs not seen since the 1980s. “I love being a part of the Olympic Movement. I think a lot of people assume that the Olympics is just about one competition every four years, but a closer look shows that it’s really much more. Being in this world is about the hours and hard work spent finding all the best parts of yourself through sport and expressing them in that one moment which is the Olympics. Doing so while gaining the friendship of other athletes from all over the world is the greatest takeaway of this whole experience. A medal in London is just going to be the icing.”

However, there is always a downside to this type of commitment, “All the time away from my wife is really tough.”

Hyeres, in the south of France, is famed for its cold, strong winds, but so far this week the sailors have seen none of that. Hot weather combined with light or non-existent winds has played havoc with the schedule. After three days only two races were scored, though the series has nearly caught up with eight races sailed.

After winning the opening race, Railey then picked up a black flag before recovering with a string of late top ten/early teen results to go into Friday's medal race in ninth place, though he now has no chance of a medal. Boyd was more consistent early on but picked up an OCS in race five to drop out of the top 10. He finally ended up in 15th place, so misses the medal race, but can be heartened with a series of top 10 places and was also leading one of the abandoned races. There will be success along the way and there will be setbacks – for both of them – but Boyd is upbeat about the experience that lies ahead.

“I've committed fully to the Finn and to winning a medal at the Games in 2012. I've put my business into hibernation, so there will be no distractions. It's going to be an intense two years ahead of me, but I am ready and excited. It's always stressful getting organized, and I'm looking forward to getting into my routine of training and sailing. Hitting the ground running, and I can't wait. ”

You can follow Bryan at www.bryansail.com and Zach at www.zach2012.com