After a thrilling medal race, Skandia Team GBR's Ed Wright (GBR) took out the 41 Trofeo SAR Princesa Sofia MAPFRE in Palma for Finns, the first European leg of the 2009-2010 ISAF Sailing World Cup. Ivan Kljakovic Gaspic (CRO) took the silver and Jonathan Lobert (FRA) the bronze. The medal race itself was won by Zach Railey (USA) who led from start to finish in the shifty conditions. 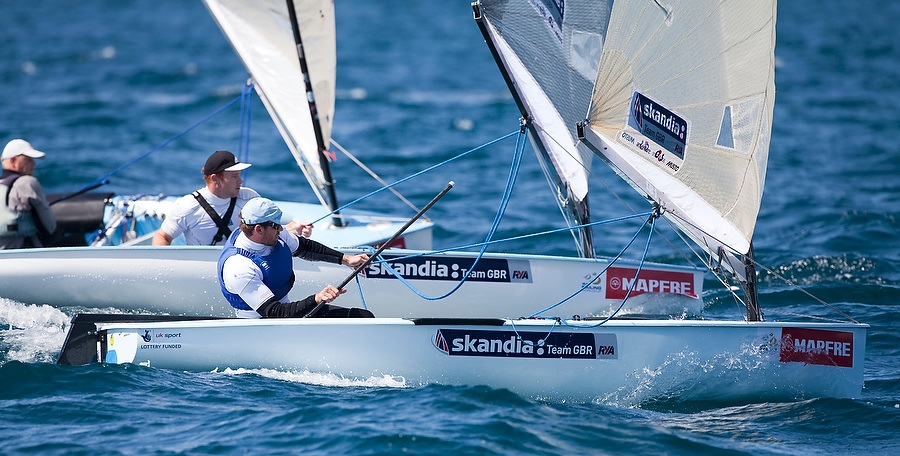 After a thrilling medal race, Skandia Team GBR's Ed Wright (GBR) took out the 41 Trofeo SAR Princesa Sofia MAPFRE in Palma for Finns, the first European leg of the 2009-2010 ISAF Sailing World Cup. Ivan Kljakovic Gaspic (CRO) took the silver and Jonathan Lobert (FRA) the bronze. The medal race itself was won by Zach Railey (USA) who led from start to finish in the shifty conditions.

Typically of the wind this week just not playing the game, the medal race day brought flat calm conditions and an early postponement for all classes. The Finn medal race was supposed to start at 11.00 but it wasn't until 12.40 that the fleet finally got away in just 7 knots of breeze.

At the first windward mark Zach Railey (USA) was leading from Andrew Mills (GBR) and Daniel Birgmark (SWE). Regatta leader Ivan Kljakovic Gaspic (CRO) rounded in fourth, with his main challengers Jonathan Lobert (FRA) in fifth and Ed Wright (GBR) in sixth. Railey held his lead on the first downwind from Mills, while Kljakovic Gaspic and Wright moved up into third and fourth.

The second windward leg proved crucial. Though Railey held onto his lead, everyone behind him changed positions. Birgmark recovered to second while Thomas Le Breton (FRA) climbed from eighth to third. More importantly Wright passed Kljakovic Gaspic. Lobert, who was in third place overall going into the medal race, looked in trouble as he faded to eighth while early regatta leader Rafa Trujillo (ESP) was way back in ninth

The final exciting downwind leg to the finish brought only two significant changes. Wright managed to slide past team mate Mills to put that crucial one boat between himself and Kljakovic Gaspic to take the regatta win by just one point. The Croatian finished sixth in the race to take the silver while Lobert moved up one place to seventh, which was just enough to hang onto the bronze from his team mate Le Breton who took third in the race to finish fourth overall, just one point behind Lobert.

Race winner Railey said, "Both sides worked in the race today. I had a pretty decent start and was able to get around the first windward mark in first. Things were pretty tight going around the bottom gate. On the second beat Daniel and Thomas gained huge and sailed really well up the right side to round close behind me in 2nd and 3rd. I stayed more middle left, but was just able to get across to still be in first. Stayed that way for the rest of the race on last downwind. The real excitement was from 4 to 9 with all of them finishing very close together and fighting it out for the final placings."

"This week was really good for me even though the results were not great. I feel like I have made some improvements with some certain strategies and also found some weaknesses that need to be addressed as the season goes on. Looking forward to Hyeres and building upon today's race in France."

Once again the Skandia Team GBR sailors produced an impressive performance with three sailors in the medal race and the fourth one finishing 11th. Coach Matt Howard, said of Wright, "He's not had the best week this week, but I think that's the sign of a top performer, that even when he's not quite hitting the groove he's still up there."

Wright said, "I was pretty lucky to get the Majorca World Cup win, but two in a row is really great and hopefully I'll be able to carry it on at the next events in the year. The whole week has been pretty up and down – it's been a tricky regatta, and the medal race just as much."

"There were light winds, and usually a left hand track here, but the wind kept flicking to the right. Ivan was in front and dominated the left hand side, and I was quite lucky to get round him on the right, so that pretty much gave me the event."

Ed Wright had not even been in the top four all week until the penultimate day but pulled out the results when it mattered. Ivan Kljakovic Gaspic also looked in trouble mid-series but recovered to lead the fleet into the medal race, but was perhaps a little bit unlucky to lose the series by just one point. Third placed Jonathan Lobert is showing his potential in the best possible way, improving in each regatta and his first major regatta podium place.