2. Agenda
The Agenda was approved with the addition of the discussion on Events entry fees and a discussion raised by the President on the development of a class environmental sustainability plan.
The minutes from the 2016 IFA AGM (previously circulated on IFA website and to secretaries) were approved.

3. Accounts
a) The 2016 accounts were approved – (unanimous) - Treasurer’s report in APP1.
b) The 2017/2018 budget was approved with the inclusion of the following additions taking effect January 1st, 2018:
(i) an increase of the event entry fees from 200€ to 300€ to allow for more media coverage and race management quality - for 28, 10 abstentions
(ii) In spite of a recommendation from the Executive for no increase in the annual membership fee, a proposal was received to increase the fee from 25€ to 30€ - for 29, against 4, abstain 1

4. Executive Committee Reports
All reports (posted on the website) noted and approved (unanimous)

5. Elections of Members to IFA Committees
a) To elect the members of the Executive Committee
(i) The President is re-elected (with the President abstaining from the vote)
(ii) Current VP Sailing Bjorn Allansson is stepping down. Rafa Trujillo (ESP) is elected as VP Sailing.
(iii) The VP Development Alejandro Foglia resigned. Marc Allain des Beauvais (FRA) is elected as VP Development.
(iv) The Treasurer is re-elected

(c) The members of the Marketing Committee are re-elected.

(a) Format and racing rules:
(i)Update on 2017 format trials

(ii) Submissions:
- to race Up/Down + Triangle (in the second lap) in over 20 knots - 37 for, 7 against APPROVED
- to keep the last day with the last race for 11th and up followed by the medal race (with the latter given priority over the last race for 11th and up, should weather conditions be unstable on the final day - for 43, against 1 APPROVED
- to raise the wind limit to 6 knots to start the race (measured as per the current rule) - 31 for, 7 against, 5 abstain APPROVED
- to remove Rule 42 completely downwind - 5 for, 39 against REJECTED
- to allow boom dipping when Oscar is up – WITHDRAWN
- to reduce the wind limit for rule 42 to 8 knots - 21 for 21 against, 2 abstain NO CHANGE UNTIL FURTHER TRIAL
- to sail all races under Oscar – WITHDRAWN

a) Update on 2020 quota and qualification

a) Discussion over the Media plans for future events

- The President recommends that the IFA should develop a “Green plan” focussing on regatta environmental approach. Council approved. A plan will be made and proposed by the IFA office.

Other points addressed by Council during the AGM for further discussion or implementation:

·   How do we increase the value that the IFA adds to the average club member
·   Following the adoption of the “Green Policy”, a fee might be put on the coaches for use of coach boats
·   IFA should have a policy to cancel unfair races even if they are broadcasted live.
·   Event manual changes - change 'shall' to 'should' to avoid protest based on RC decisions?
·   Media operations at events: the Olympic classes should look at ways to mutualise equipment (drones, tracking, gps…) and to share WS know-how and media equipment

Our finances are cyclical and it’s always a challenge in an Olympic year with increased costs and reduced income. The budget forecast a small loss in 2016 and the final result of a €6384 deficit is only 3.1% more than predicted which is well within manageable tolerances. The fact that we achieved this result was largely down to the Executive reducing costs wherever possible and making significant improvements to our Accounts Receivable position.

There is also a proposal on the table to increase the entry fee for IFA events to €300 to pay for enhanced media coverage at events in line with Oli Tweddell’s reports. Even at €300 our entry fees are still cheaper than other Olympic classes. The International Laser Class Association for example charges a €330 entry fee at current exchange rates.

The budget has been adjusted to reflect the tight control on expenditure seen this year and the anticipated increase in entry fee income. The result is that we expect to make a small profit in the next few years despite increasing funding for Development.

I have incorporated the Masters accounts into the main report this year as although they run a separate balance sheet they are legally part of the same organisation so we need to record their income and expenses. In 2016 they made a small loss of €3693 which has also impacted our overall results.

Income was down in 2016 compared to 2015 but we had budgeted for this and offset it with a tightening of control on our Expenses. 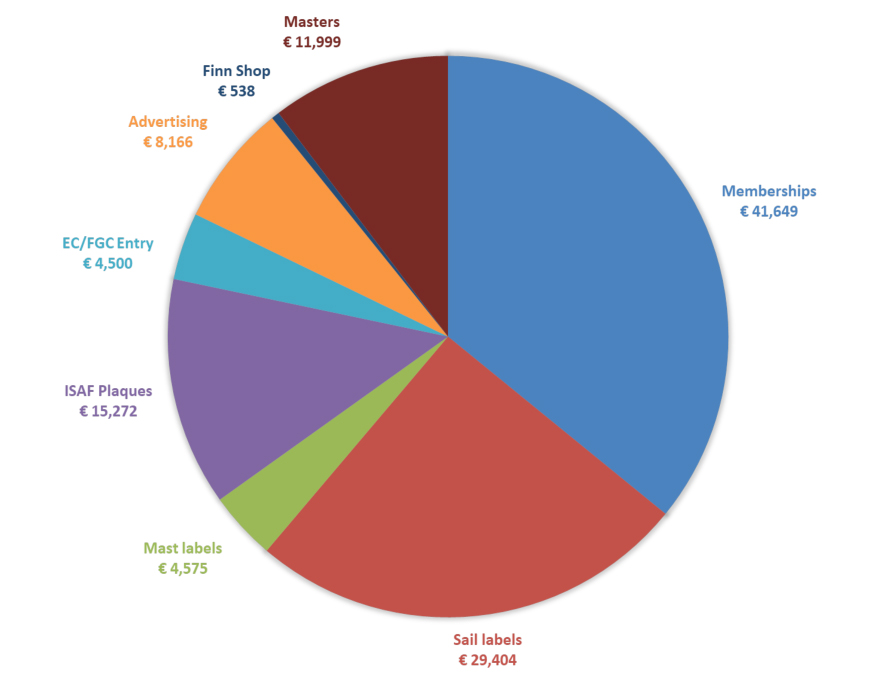 Expenses were €9650 under budget. Major savings were shown against Office Expenses and Finnfare. This is a great result that reflects the skills of the Executive in managing the Association. 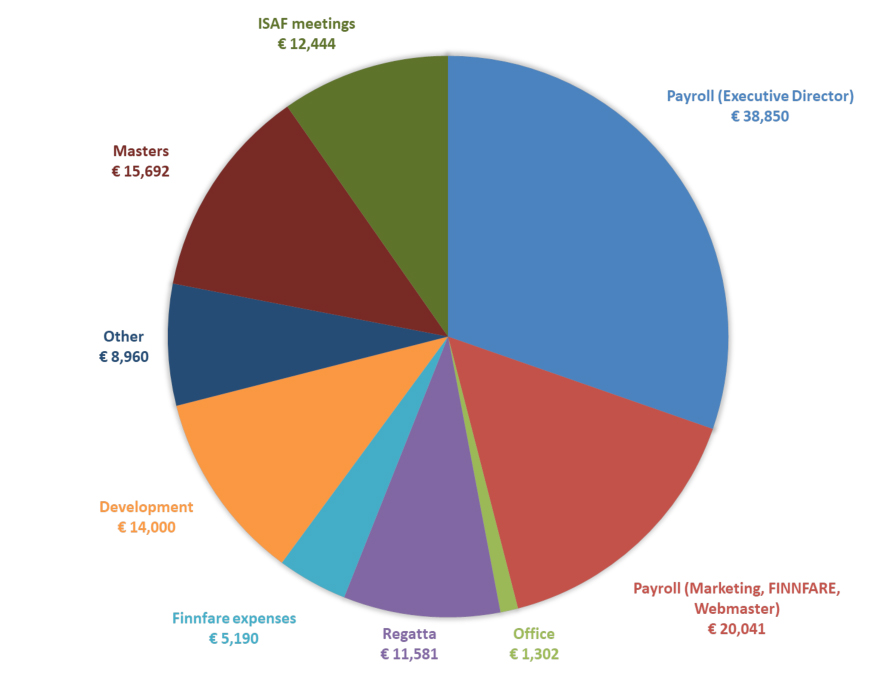 Accounts Receivable reduced by €9111 due to more regular invoicing in 2016. Overall our Capital dropped by €7536 but we do not expect this trend to continue and the budget predicts a small profit over the remainder of this Olympic cycle. 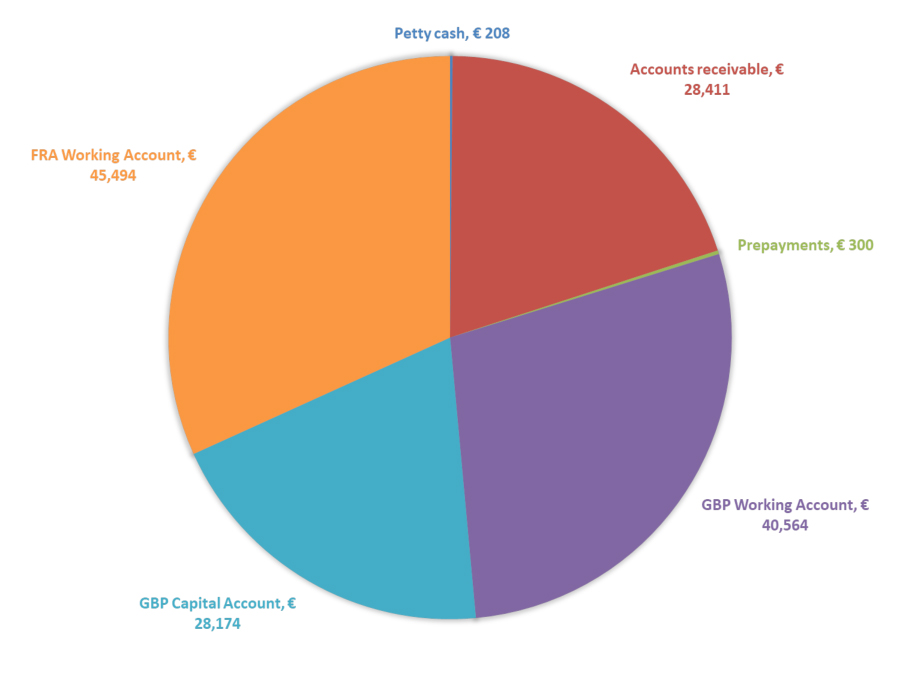 The IFA event circuit for the quadrennial – 2018 to 2020 has been considered with several parameters in mind.

The Executive has been looking at all the following parameters:

During the 2017 IFA AGM, the following has been considered and decided:

2018
With the FGC (World Sailing championships) in Aarhus in August, we are looking at a start of the season in the south going North towards Denmark. Therefore the Europeans will be held in Cadiz (after the Carnival regatta and before Palma).

2019
Following IFA Deed of gift , the Finn Gold Cup has to be held outside of Europe once in the quadrennial. Upon confirmation at the November meeting that WS gives permission to have the Olympic qualification at the Europeans rather than at the Worlds : Melbourne will hold the Finn Gold Cup at the end of the year at Royal Brighton Yacht Club. This will allow sailors to use the boats coming from Japan. Sailors will be able to train in the southern hemisphere with a circuit of solid events in Melbourne and Sydney.

In this situation, the 2019 Olympic qualification will take place at the European Championship in Marsala Sicily, in May. This will be confirmed following site inspection and contract agreement.

If WS does not allow us to have our Olympic qualifiers at the Europeans instead of the worlds, then we will have the Finn Gold Cup in Marsala. Another venue will be decided to host the European championship.

2020
If the 2019 FGC is in Europe then Melbourne will host the 2020 FGC early January (to allow sailors to go to Miami for the Continental qualification).

If the Worlds are outside of Europe in 2019, then the 2020 FGC will be held before or after the Trofeo Princesa Sofia in El Arenal, Mallorca. The Europeans will be held in Gdynia, Poland in September 2020.

This would optimise travelling in a year reduced in time by the Olympics and packed with events (Continental qualifications).

The Silver Cup sailors are considering several options for the next three years. Bids are expected from all venues before being seriously considered. The U23 are represented by 3 sailors: Joan Cardona (ESP), Cameron Tweedle (GBR), Jock Calvert (AUS).

Timing selected by the U23 is between mid-July to mid-August to optimise school holidays. The growing number of sailors from this age group (48, and 15 under 19) shows the importance of this event for the class newcomers. The choice will be made regardless of Olympic circuit to encourage a maximum of young and newcomers in the class, rather than catering for the young Olympic sailors